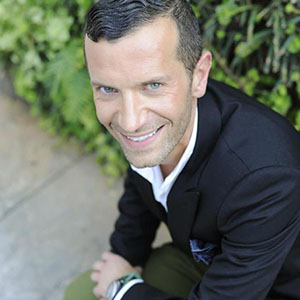 Yann Vasnier is one of the coolest people you don't know.

Vasnier is from Brittany, a graduate of the prestigious ISIPCA perfume institute in Versailles, and good friends with Marc Jacobs (Jacobs appeared in his first-ever ad campaign for Bang). He's relatively unknown outside of his set of international style elite, despite the fact that any casual shopper could identify the scent of Lola or Bang. But like other stars in the perfume world (Christine Nagel, Olivia Giacobetti and Christopher Brosius), he's got hundreds of groupies online.

"The name of perfumer can attract customers to a perfume or even entire brand," Knezhevich says. "It's the same situation as with movie stars: Producers want assured success."

I visited Vasnier's office recently, a sunny 11th-floor space overlooking 57th Street in Manhattan. Inside, Vasnier had piled hundreds of vials and bottles of perfume on every space--desk, floor, windowsill--he could find. Some of it, like the huge jugs from Chanel, he has collected for himself; others he uses in the dozens of fragrances he creates each year.

It was like being in an olfactory candy store: I whiffed one vial of decades-old deer musk, which smelled strongly animalistic.* "Tribe, blood, fur," Vasnier called it.

I also smelled No. 6 M, which he concocted with Ohne Titel for the Six Scents series. It smelled at first of cardamon, then of cedarwood and plum, with a civet or musky finish. Primal but feminine, I'd say.

No. 6 was inspired by the deer musk I smelled and contains several natural ingredients, something that has been very popular lately in the U.S. Fragrances that use only natural ingredients offer pure, intense, true scents, sometimes at astonishingly high prices. But there are some drawbacks: The smells fade after a couple hours because they don't include synthetic components to lengthen their lifespan. And there's a limited range of options for perfumers to use--only 400, compared with more than 1,500 available for other perfumes.

Concerns about quality control also apply: Weather patterns affect crops differently year to year, and major events like drought or flooding can cause the prices of raw materials to spike. Lately, weather irregularities have affected even turpentine, which is a foundational component of synthetic scents. Vasnier compared the fluctuation to what happens with oil prices: "It's insane."

Despite the drawbacks, naturals have sold well in recent years, and perfumers who specialize in natural ingredients have earned respect in the fragrance industry.

"They’re finally getting their due recognition," says Rochelle Bloom, president of The Fragrance Foundation. "They were always perceived as flower children, but now they’re not thought of like that. They are serious."

Indeed, Mandy Aftel's Honey Blossom was the first-ever independent natural fragrance to be nominated for a FiFi Award (the FiFi's are annual honors awarded by The Fragrance Foundation. For fragrance enthusiasts, they've got as much clout as the Oscars).

These days, whether he's working with natural materials or not, Vasnier gets the most excited about working in close contact to the designer himself. Consumers are less discerning about the quality of a fragrance, he says, so it's a treat to create something truly distinguished.

"It’s amazing to work with them, like a breath of fresh air," Vasnier says. "Working directly with a designer is a luxury for us. Like with Bang--it was a luxury."

Written by Hannah Elliot for Forbes

I write about style, art, culture, watches and high-end cars as a staff writer for Forbes. Whether I'm talking with Bernard Arnault, Jeff Koons or Ralph Lauren, my goal is to explore life from the inside, to figure out what success means to those who believe they have attained it--or are well on their way. Write to me at helliott@forbes.com. You can also follow me on Twitter (@HannahElliott), Instagram (@HannahElliottxo), Facebook and Google+